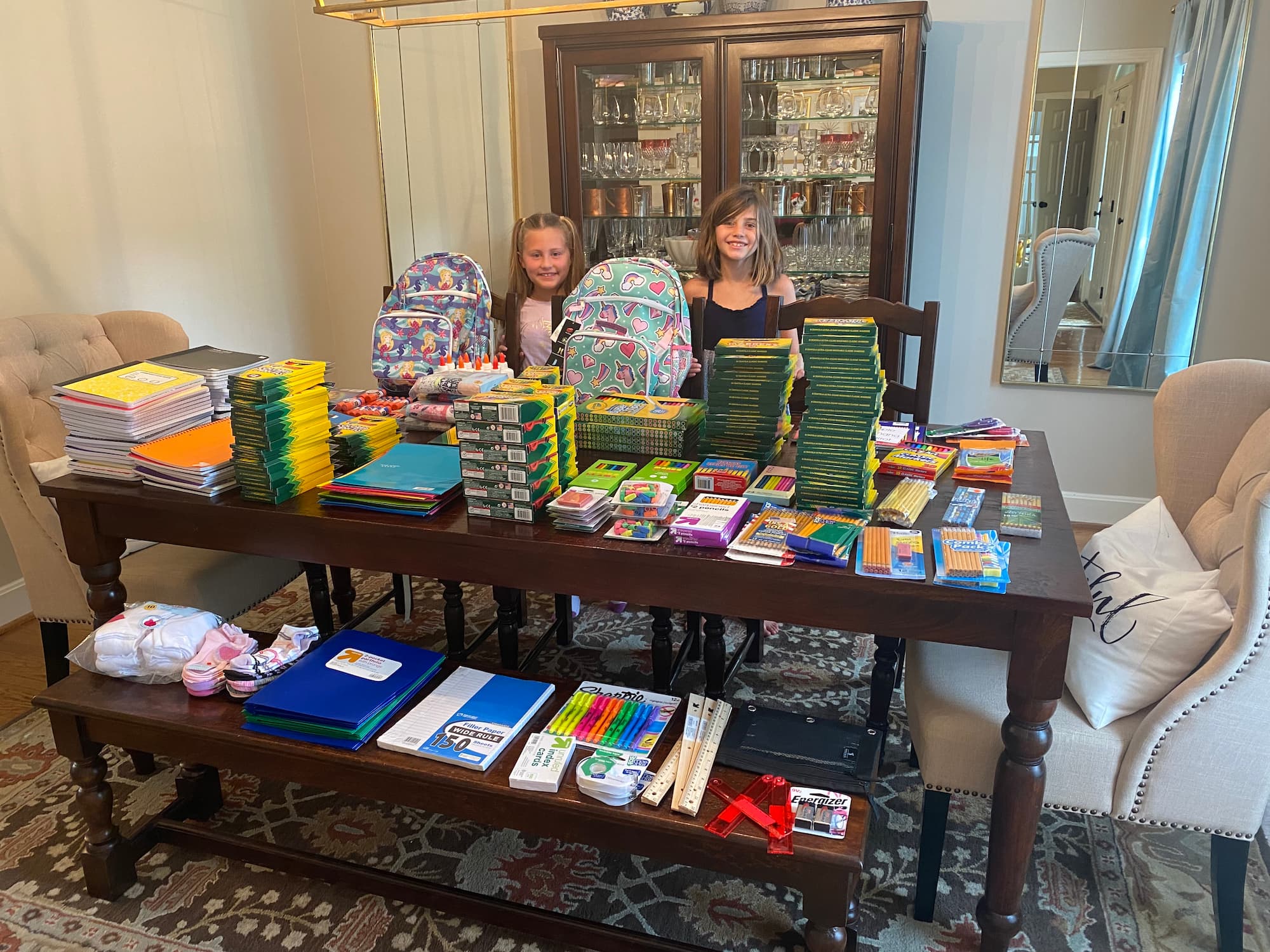 Harper Wrinkles and Kaylee O’Brien have a lot in common. They’re both second-graders at Anchorage School, they’re best friends, and they share the same birthdate. It’s the latter of those facts that lead them to make a special request for their “shared birthday” this year. Instead of presents for themselves, they asked their friends to buy school supplies to donate to the kids at Bellewood & Brooklawn.

“They have some great friends,” said Kaylee’s mom, Anna. “The entire second grade really went above and beyond for this.”

Indeed, they did. On a recent Tuesday afternoon, Harper and Kaylee, along with their moms, Anna and Jenna, drove to the Bellewood Campus to drop off the items they collected. The Target bags, boxes, and large gift bags, each full to the brim, took up almost the entire back portion of Jenna Wrinkles’ SUV.

But they didn’t just drop them off and leave. They wanted to learn more about the children they were helping.

“They wanted to make sure they understood exactly who it was that they were helping,” Harper’s mom, Jenna, said.

So, gathered around a picnic table on the Bellewood Campus, both girls listened intently as a Seven Counties Services / Bellewood & Brooklawn team member told them about the kids and the need for friends in the community like Harper and Kaylee. They asked poignant, informed questions that clearly showed they were interested, and, in the end, when asked if they understood how their act of kindness would go to help other kids like them, the pair’s toothy grins (made in unison) told the tale; they felt good inside.

Studies* have shown that youth often flourish from being active in philanthropic efforts. Different from sports or making good grades, which foster a sense of “personal achievement,” children and adolescents serving their community have an increased sense of self-worth, belonging, and less societal disenfranchisement than that of their peers and it often leads to a lifelong pursuit of wanting to give back to their community, which helps everybody. There are many ways youth can become involved in philanthropy at Seven Counties Services / Bellewood & Brooklawn. There are volunteering opportunities, asking for donations of money or goods (like Harper and Kaylee did with school supplies), or something as simple as working at home or in their classrooms to make Christmas and birthday cards for the children. All are great ways to introduce children to philanthropy at an early age.

If you would like to get your child involved in philanthropy, please contact Mera Corlett, Community Engagement Coordinator, at mcorlett@sevencounties.org.

*LearningtoGive.com, “Youth Philanthropy”, edited by Brea Reimer (2016) from the original by Ashley Cierlak-Lubben (2004)

BECOME A FOSTER PARENT
A Message From the CEO – July 2021

Message from the CEO – August 2021
Scroll to top